Fractions on a Number Line

Fractions on a Number Line

Purpose: Puzzles focus on ideas of adding and subtracting on the number line—briefly with integers to set the stage and later with fractions. Children learn by experimenting and seeing the effect of their work: + moves to bigger numbers, to the right; – moves to lower numbers, to the left; they learn to predict the results of particular moves.

Work is not “checked” as in tutorial apps and games. Children see the effects their code produces and change it if they like. Children can mark “I did it!” on a checklist as they do the puzzles.

Description: In the first few Set 1 puzzles, children see a number line with only 0 and 10 labeled.

let them move the circle on the number line. Each move draws the proper arc and labels the new number. They also have a block for specifying a starting place

. It defaults to 0 but can be changed by the child.

Later puzzles in Set 1 display a “zoomed in” number line focused on eighths—with 0 and 1 labeled along with their fractional equivalents 0/8 and 8/8. The fraction 1/8 is also labeled.

—children solve the remaining Set 1 explorations and new Set 2 puzzles similar to the ones they just solved with whole numbers, showing how adding and subtracting fractions parallels working in integers (Figure 2). The Repeat block

are also available for experimentation.

Set 3 Challenges move to a number line where integers and their fractional equivalent in halves are labeled from 0 to 9 and 1/2 is also labeled (Figure 3).

—include both integers and mixed numbers. Set 3 Challenges children to extend their understanding of addition and subtraction of fractions in the context of halves (Figure 4). 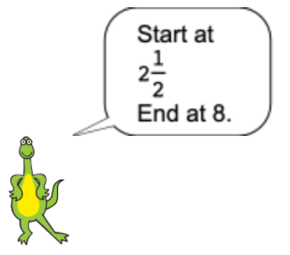 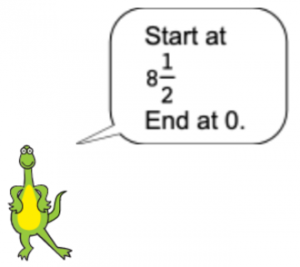 Introducing this in class: The very small number of programming blocks and the clear context—familiar symbols on blocks and a familiar number line image with integers—make it possible to introduce this in less than 10 minutes to children who have had little to no prior programming experience. Show how to drag a block and how to click; have a child come up to demonstrate another move; show how to type a number other than 0 in the start at block (and then click it); have a child show how to start at a different place; and show how to get a new puzzle. Children do half the demonstrating and can then work independently.

When the environment transitions to a “zoomed in” number line, have children repeat the demonstrations and ask them what they see that is similar and what is different? Children will learn how the microworld operates through continued experimentation and exploration. Children who have not worked with fractions will need to know how these new symbols are pronounced—“three eighths.” Many also need to notice the difference between “move to 2/8” from “move to 2.”