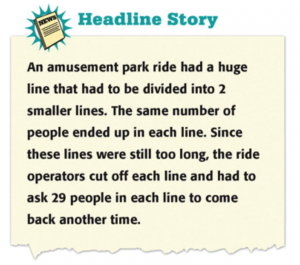 Read the Headline Story to the students. Encourage them to create problems that can be solved using information from the story.

An amusement park ride had a huge line that had to be divided into 2 smaller lines. The same number of people ended up in each line. Since these lines were still too long, the ride operators cut off each line and had to ask 29 people in each line to come back another time.