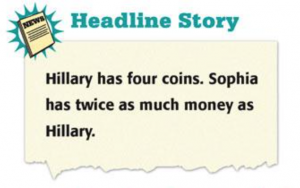 Read the Headline Story to the class. Help children see that the two pieces of information have a different nature: we know how many coins, not how much money Hillary has.

Hillary has four coins. Sophia has twice as much money as Hillary.