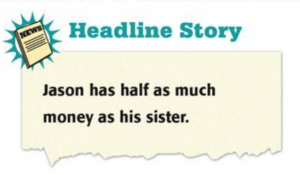 Share the Headline Story with the class. To produce some of the sample responses, pose questions such as, “If Jason has 50¢, how much does his sister have?” or “Could Jason’s sister have 25¢?”

Jason has half as much money as his sister.