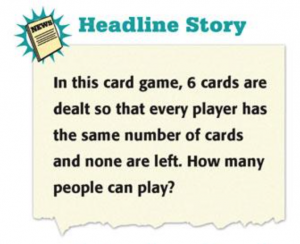 Share the Headline Story with the class. To produce some of the sample responses, pose questions such as, “If two people play, how many cards would each person get?” or “Can four people play this game?”

In this card game, 6 cards are dealt so that every player has the same number of cards and none are left. How many people can play?