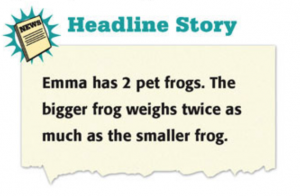 Share the Headline Story with the class. Encourage children to think of creative ways to complete the story.

Emma has 2 pet frogs. The bigger frog weighs twice as much as the smaller frog.