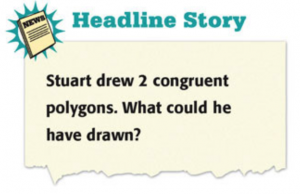 Read the Headline Story to the class. Encourage children to find different answers for the question. Suggest that they mention what Stuart could and could not have drawn.

Stuart drew 2 congruent polygons. What could he have drawn?