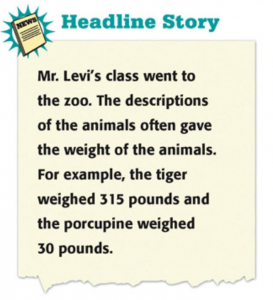 The Headline Story is deliberately broad in order to allow children to respond at varying levels. You may want to ask questions such as, “How do the weights of the animals compare?” or “Which animal is bigger?”

Mr. Levi’s class went to the zoo. The descriptions of the animals often gave the weight of the animals. For example, the tiger weighed 315 pounds and the porcupine weighed 30 pounds.