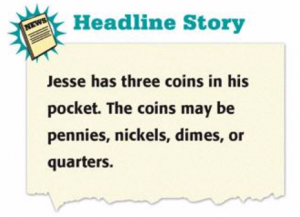 Share the Headline Story with the class. If children need help coming up with some of the ideas suggested in the sample responses, pose questions such as, “What coins could Jesse have?” or “How much money could he have?”

Jesse has three coins in his pocket. The coins may be pennies, nickels, dimes, or quarters.