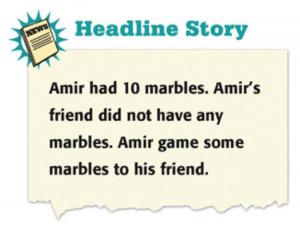 Read the Headline Story to the class. Encourage children to make up sentences or stories about sharing the marbles. One way to explore the mathematical relationships is to make a table of possible combinations showing how 10 marbles can be shared.