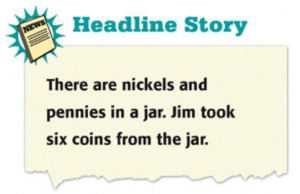 There are nickels and pennies in a jar. Jim took six coins from the jar.