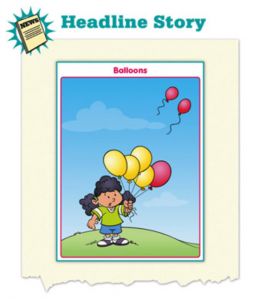 Display the image pictured in the sidebar, Balloons, to children. Prompt children to tell addition and subtraction stories about the picture by asking questions such as, “How many balloons are there?”,  “How many flew away?” or “What would happen if two more balloons flew away?”