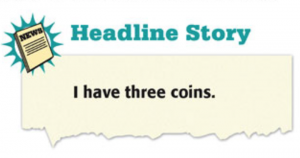 The Headline Story is purposefully open-ended so children can explore several possible ways to answer. Encourage children to make up number sentences or stories about the sentence. As children present possible scenarios, you might want to add clues, such as “none of the coins are dimes,” or “at least one of the coins is a penny.”

I have three coins.