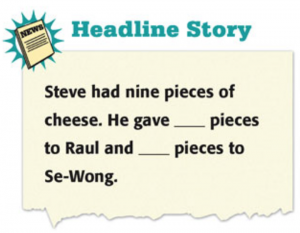 Display the Headline Story pictured in the sidebar and read it aloud to the class. The sample responses are deliberately broader than what a class is likely to produce in one session. To help children get started you might ask, “How many pieces of cheese might Steve give to Raul and to Se-Wong?” or “How many pieces might Steve keep for himself?”