Moving on the Number Line, #10 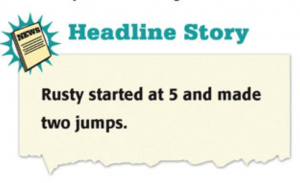 For this Headline Story, children make up stories about a character named Rusty. Encourage children to relate their story to a floor number line or a desk number line. For children who may have difficulty describing two jump scenarios using words, you might have them demonstrate the two jumps (that start at 5) while other children record the jumps. This might help them later describe the jump using words.

Rusty started at 5 and made two jumps.