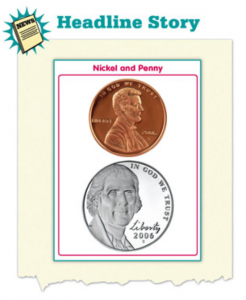 Display the image in the sidebar, Nickel and Penny, to the class. You may want to show an actual nickel and penny as well. Ask children to think about the value of the coins or what they might do with them. Then encourage children to make up sentences or stories about the picture.