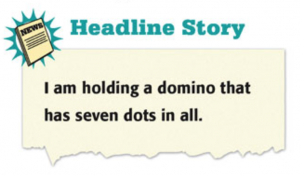 Read aloud the Headline Story to the class and encourage children to describe what the domino might look like.

I am holding a domino that has seven dots in all.