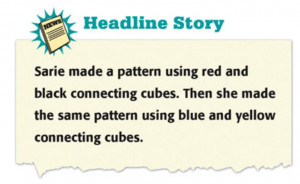 Display the Headline Story image pictured in the sidebar to the class and read it aloud. The sample responses given are deliberately broader than what a class is likely to produce. With any Headline Story, you might ask one new question explicitly to help children learn to give more varied responses. For this story, you might ask, “What might be the pattern with only red and black cubes?” or “What might it look like with blue and yellow cubes?” Children might explain how the patterns are similar.