This is a school term, sometimes used in teaching math. The word has no formal mathematical definition.

A model for base 10 numeration. Ten copies of the smallest block (variously named “a bit” or “a tiny cube”) lined up in a straight row exactly match one of the long rods (variously called called “a rod” or “a long”). Ten copies of the “rod” placed side to side exactly match the large square (generally called a “flat”). And ten flats piled on top of one another create a large cube (not pictured here). 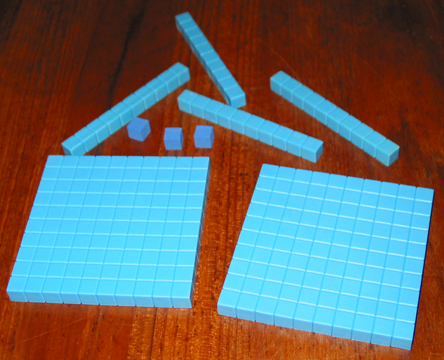 If the bit stands for 1, then this display represents the number 243: two hundreds (the flats), four tens (the rods), and three ones (the bits).

When children are studying decimals, these materials and images are revisited. At this point the value 1 may be assigned to the flat or even to the large cube. For example, if you decide that the flat is 1, then, because 10 rods make a flat, each rod is worth one tenth (0.1), and each bit is worth one hundredth (0.01). If the flat is 1, then this display shows the number 2.43: two ones, four tenths, and three hundredths.