Guess My Rule games are games in which one person thinks up and gives examples of some “rule,” and the player(s) try to discover the rules from the examples.

When the teacher is leading, Guess My Rule games are particularly suitable for the Silent Teaching technique. The teacher thinks up a secret rule. After silently giving a few examples that obey the rule (show the pattern), the teacher offers eager students the chance to show (not tell) that they “got” the pattern by silently doing more of what the teacher had been doing. If the student’s action was correct, the teacher nods (or just invites another student); if wrong, the teacher undoes the student’s reply (letting the class see it first) to indicate that it does not follow the rule. The game continues so that many students are involved.

Why silence? The teacher’s silence lets students focus visually (nothing to listen to!) and lets them make their own discoveries. Students who “see” the rule right away enjoy showing that they know it. Students’ silence — showing they know the rule without telling what the rule is — gives other students chances to collect more data and possibly discover the rule, too, before the rule is given away. Thus, Guess My Rule gives the teacher a good opportunity to reach students of different abilities.

Examples of Guess My Rule games

Then the teacher offers the marker to a student, in a silent request to complete the pair. As the class catches on, other requests may work backwards, or be more challenging.

Place two loops of string on a large mat, overlapping as shown here. Place a collection of Attribute Blocks — in this case large and small squares and triangles of three colors — nearby, but off the mat. The “secret rule” this time will be “small blocks in one loop, blue blocks in the other” (and all other blocks must be set on the mat, but not inside either loop. One by one, the teacher picks up a block and places it in the proper spot. After a few examples, invite eager students to place the remaining blocks.

Sorting into a chart or table 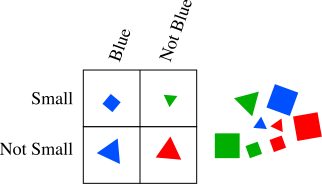 One can, instead, sort into a tabular arrangement.

Here is exactly the same sorting rule and four already-placed blocks, using a table instead of a pair of loops. The labels in this illustration “give away” the sorting rule, and wouldn’t be used in a Guess My Rule game (though they certainly could be used in a simple sorting activity). Without the labels, though, this form makes it harder to see that the four boxes are not four totally independent regions. Therefore, before playing the game in this tabular form, children need to have seen a table with labels (e.g., in the simple sorting activity). In a Guess-My-Rule game, the “labels” would be blank, so that the rule is not given away, inviting children to think about what might later be written on them.

Why are labels more important on the tabular form than on the Venn form? Four square regions that happen to be arranged in a square array could, of course, be totally independent. One might collect red objects, one green, one blue, and one yellow (which would leave it empty in this example). Mathematical communication tends not to use arrays in this arbitrary way, and so, over time, we come to expect arrays to carry the implication that the rows and columns “mean something.” In this case, the two top boxes are “related” in that both are to contain only small blocks, and the two left boxes are related in that they are only to contain blue blocks. But children might — quite scientifically — not make such assumptions without evidence.