This page focuses on a way to introduce KenKen puzzles so that students see, focus on, and learn the logic, not just guessing.

These puzzles give children excellent practice with elementary school arithmetic—addition, subtraction, multiplication, and division—in ways that also build their logic and problem-solving skills, needed in algebra and for high-stakes tests. When introduced as suggested here, the puzzles also support logical argument and proof.

Other closely related puzzles include MysteryGrid, which varies the arithmetic practice and logic a bit more than KenKen, and Futoshiki which is pure logic. MysteryGrid puzzles available also on https://SolveMe.edc.org.

This page is for you, to help you prepare. It is not a lesson plan or a prescription for teaching. As you find your own style, keep the focus on having the children puzzle things out.

When you first introduce any new puzzle, focus on elements common to all problem-solving.

Of course, you’ll also need to teach the rules for KenKen, but they’re not the goal. Learning rules works best in context, while you are playing for the first time. “Explaining” rules beforehand is rarely effective; it’s too hard to understand and remember all the rules before you play.

Introduce the idea of solving the puzzle with another person in a turn-taking way—initially, perhaps, the whole class solving a puzzle projected on the board. As you introduce the puzzles to the class, model the idea of looking around for a good place to start, or to go next, by scanning yourself for a place to go, and asking (and waiting a bit) for student ideas. Do feel free to contribute ideas yourself—after all, that’s part of the turn-taking—but not too much, and keep to the simplest ideas, so that students have the chance to solve “harder” situations.

Some students will eventually prefer solving puzzles on their own. Have a printed supply ready. 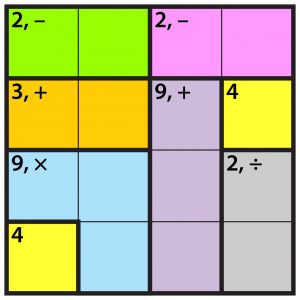 It’s hard to learn the rules all at once before playing the puzzle, so give just the briefest introduction before diving in. Start with a 4 × 4 puzzle like the one shown above.

Figuring out where to start

Finding a place to start is part of what makes a puzzle puzzling. 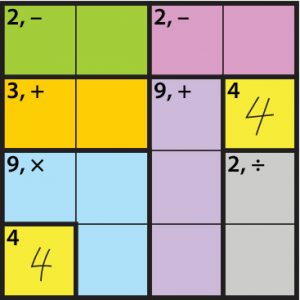 There is no special order for solving a puzzle, no “rule.” But there are good strategies.

If a puzzle has single-cell regions, as this one does, that is obviously the “easiest” place to start. That number is the target, no operation is needed, so we just write the number.

Now what? There are at least two “easiest” next steps. Ask for ideas.

Initially, students generally just guess, rarely expecting that solving is about deduction. For example, they might guess that 3 and 1 could go in the green cage (top row). That’s certainly possible—the goal is to make 2 using subtraction, and 3 – 1 = 2—but point out that three other pairs of numbers are also possible: (2, 4), (4, 2), and (1, 3). We don’t yet know which is correct.

Often, ask “How did you figure that out?” or “do you know that those must be the numbers, or are you just saying that they might be?” This helps distinguish deduction from guessing, and encourages students to explain their logic and develop their ability to construct viable arguments.

Modeling how to “puzzle” out a solution 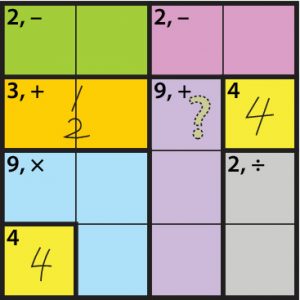 After waiting long enough for students to suggest ideas, feel free to model “finding an easy place” by pointing to one that you see. There are two good candidates.

Now, what can we fill in? And where might we go next? By this point, students may well have ideas about how to proceed.