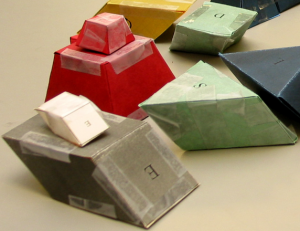 Slightly more formally — and to clear up ambiguity about whether we’re talking about all of the space an object takes up or whether hollow objects have less “volume” than solid ones — volume is the amount of 3-D space enclosed within the boundary of a three-dimensional figure.

As is true of the two-dimensional measure, area, what we mean by volume is based on a common-sense notion of “amount of stuff.”

by comparing that directly to a length (inch, mile, centimeter, light year) we already know.

We measure the area of some figure

— that we already know (or agree about) the area of.

Similarly, we measure the volume of a figure by comparing it to a small chunk of volume we already know (or agree about).

Also, as with area, we can compute a volume without actually counting off the little chunks, if the shape we are considering is well-behaved enough to analyze.

Why are we just giving a number and not saying “cubic units”? If our units were length — like miles or centimeters — we would have to specify any areas measured in terms of those units as “square miles” or “square centimeters” and any volumes as “cubic miles” or “cubic centimeters.” If the unit we are using is, itself, a unit of volume — say, we choose to use the volume of a particular chicken egg as our unit — then the volume of, say, an ostrich egg is a direct comparison: about 25 chicken eggs, not 25 cubic chicken eggs (whatever that could possibly mean).

The volume of this one “layer”

is composed of six such layers

and so its volume is 6 times the volume of one of the layers: 6 × 6 × 6. The yellow prism labeled B in the picture below

measures two inches by two inches at its base. Four (2 × 2) 1″-cubes would sit on that base, filling the bottom “layer” of the yellow prism. Because that yellow prism is exactly 3″ tall, three layers of those cubes would fill it completely. Because the cubes fit perfectly, we can compute this volume easily as 2 × 2 × 3 = 12 units of volume. If we refer to each of those volume-units as one cubic inch (which they are), then the volume is 12 cubic inches.

Students who understand volume as it is described above can reinvent for themselves many of the volume formulas that they are often asked merely to memorize. Each formula they derive helps strengthen their understanding (and memory) for the other formulas they know. The volume of a solid all of whose faces are rectangles is found, as shown above, by multiplying the lengths of each of its dimensions: the product of its two base dimensions gives the area of the base, the height tells how many “layers” are in it, and the product of all three gives the volume.