Informal: an angle that matches the corner of a (rectangular) piece of paper, or the angle at the base of a capital L or the top of a capital T.

These are all examples of right angles:

These are not right angles:

You can construct a right angle just by folding paper, even one that has been ripped so that there are no straight edges!

In any direction, fold the piece of paper. For example:

Then make a second fold, being careful that the original crease lies on top of itself.

When you unfold the piece of paper, the two creases will be perpendicular to each other. The four angles are all right angles.

Why does this work? The first fold creates a straight-line crease. The second fold folds one part of that line onto the other. If an angle is folded through its vertex so that one side of the angle lies directly on the other, the fold bisects the angle. The straight line of the original crease forms a straight angle (180°) around any point on it. Folding through that point bisects the angle, so the resulting angles are each 90°, and so they are right angles.

Four right angles fit around a point. The way we define degrees, a “full turn” around a point is 360°, so the measure of each right angle is one fourth of that: 90°. In informal speech (not mathematics), right-angle corners are sometimes called square corners even though, as in the shapes above, there is nothing “square” about the shape. Two lines that are at right angles to each other are said to be perpendicular to each other.

The gh in “right” was once pronounced; it descended from the c in Latin “rect-.” In English, words with “rect-” in them often have meanings related to “right.”

Why all those meanings? What do they all have in common?

Like most words, right has great-…-great grandparents. The earliest ancestor we know might have sounded something like reg, and many of right’s cousins are spelled like reg or rect. The original meaning was something like ‘to move in a straight line.’ When we regulate something, we are keeping it on track, keeping it from changing, keeping control. Rules and regulations keep people ‘following the straight path,’ doing the right thing. The word ruler is a cousin of regular and so it is a cousin of right. When the g in a word like regular is silent (as it is in right, and many other words), we get ruler. A ruler helps you draw a straight line. A king is a ruler, who makes rules that regulate the country. Tyrannosaurus Rex was ‘king’ of the dinosaurs; ‘rex’ is the Latin word for king, and is related to reg and rect. The king—royal is just regal with another silent g—was the richest, most powerful person, who gave people their rights, or took them away! When we name children Richard or Regina or, of course, Rex—or Henry or Roy with yet another silent g—we are comparing them to kings and queens!

If right means something like ‘straight,’ why do we say right turn?

The word right suggests strength — not just the king but the right hand — and so a turn to the right is a turn toward that right hand.

Where does a right angle get its name? Are there “left angles,” too? 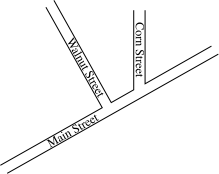 No, the right angle has nothing to do with right or left turns.

In this map, we say that Walnut Street makes a right angle with Main Street because it goes as ‘straight’ away from Main Street as possible. Corn Street veers off at a different angle.