Addition and subtraction of whole numbers can be developed together, systematically, starting with recognition of quantities and combinations of quantities, the 10-based structure of the language and symbols that represent whole numbers, convenient mental calculation methods that use the 10-based structure, and finally, formal algorithms for addition and subtraction.

The intent of this post is to help show part of the trajectory across grades.

Recognizing how many fingers

Copy me (for the youngest children)

Using two hands, display some number of fingers. Ask children to make the same display with their hands. You can also extend this, when the children find that first game too easy, to “show the same number of fingers, but a different way! Children will be quite creative about making the correct combinations.

Make this number (for the youngest children)

Give some number from zero to 10. Ask children to show that number with their fingers. For example, if you say “three,” they might show

or any other two-hand combination that shows three fingers. 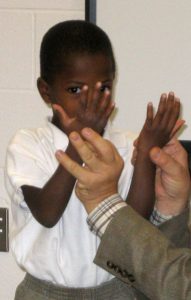 Kindergarten children may literally need some hand-holding to keep those little hands up and visible to the other children!

How many fingers? (first grade)

Using two hands, display some number of fingers. Ask children how many they see.

How many fingers don’t you see? (first and second grade)

Using two hands, display some number of fingers, showing the back of your hand like this.

The Aha! moment: We have been working on ten frames in math, and trying to find all of the combinations to ten. It is a tedious process and we have been playing a game since the first day of school that Elementary Math Coordinator Russell Larson suggested. I have been holding up my fingers and saying, “how many do you see?” I just recently started asking, “how many don’t you see?” I was finally able to see it click! They finally understand what I mean when I say “6 and 4 are friends!” Patience and perseverance are everything! — Teacher, PISD, Texas

“Counting” what you don’t see

Much of elementary arithmetic is a system of shortcuts for knowing How Many or How Much without counting or measuring.

When everybody is present, we have 25 people in our class, but we only have 22 today. How many are absent?

We can’t count the people who are absent, because we don’t see them. Students can draw a picture so that they can see them, and use that to understand the problem. But we also want students to learn how to solve the problem without having to see the missing people.

Again, if all the children were standing in front of us, or if we drew a representation, we could count them. But the point of arithmetic is that we can know how many without counting.

One part of helping children to count what they don’t actually see is to help them to “see” inside their heads: to picture things, and to stretch the mental “space” that they can work in.

How many windows are in your room/apartment/house?

If you try to solve this problem, you probably take a mental walk around and count! There are many games that help young children increase their ability to make mental pictures. Here are three.

What did I see?

Hold up a picture for 15 seconds (or some suitable time, long enough for all to see, and not so long that your students get bored). It could be a large photo of some part of the room or school, or of a child in the class, or it could be a famous artwork.

Turn the picture face down and ask people to see the picture in their heads and recall as many details as they can.

Hold your two hands up showing no fingers at all, then flash a number of fingers (like 7) for about one second — long enough to see, but not long enough to count, then go back to closed fists.

Then ask children to use their hands to show how many fingers you had up. (7, in this example)

Count in your head — two ways of playing

Make array-like pictures — you can draw them or use colorful stickers — with small numbers of objects (up to four or five) in each of up to three rows.

A game for young children

Gather children in on the floor so they can see and be close. In the center, arrange two dimes and five pennies in a row, like this, where all can see.

This is all so that the children have the chance to observe and count, and observe again before you cover some coins.

Now suddenly spring your hand playfully flat on the floor, covering two or three of the coins from either end.

Let them see, to check. Then do it again, perhaps at the other end.

Changing the question, and including silly questions (worms!) from time to time, encourages children to listen as well as look.

Think Math! builds a strong foundation for addition and subtraction by systematically helping young students become fluent and automatic with

Learning the 10-facts “cold” and then using them and extending them.

How many fingers don’t you see?

How many dots don’t you see?

Pairs-to-ten: the “How many don’t you see?” game just using words

Here are several extensions for students who have become swift at “Pairs-to-ten”: Each of these extensions uses the skill that children have already developed, and also helps make that skill even more automatic.

How many dimes do you see?

This is one of the first extensions of the same idea.

The very same images that were used to teach the pairs to 10 can be recycled to work with higher numbers. Pretend that the fingers

Varying the questions also keeps the game lively. Children become as comfortable with 60 + 40 as they were with 6 + 4, but must stay alert to which of the four questions was asked. The fact that this is challenging can be a good giggle for child and adult alike.

The parallel between these 100s facts and the 10s facts also builds (without any explanation) a strong sense of the orderliness of the way we write and name numbers.

Along with extending children’s skill to work with larger numbers, this further practices the same set of basic pairs, making them all the more automatic. It is important to include “ten dimes” and “zero dimes” along with the “100 cents” and “zero cents” and, at some point, to clarify when they pair 40 with 60 they are making pairs that add up to 100. Children quickly become adept at adding multiples of 10 that make 100.

For many children at this point, it’s no challenge at all to take the next step up to 1000s (e.g., 300 + 700), and yet they feel proud and smart working with such big numbers! Using the same images, you can ask “How many hundreds do you see?” “How many hundreds don’t you see?” The game is the same, but now they are saying that “three hundreds” plus “seven hundreds” make a thousand (or, they may say, equally correctly, “ten hundreds.” You can also say that “three hundreds” is the number “three hundred,” but you probably won’t need even to say that. As children become experts at this, they also are building the foundation for being able to do much more challenging problems mentally.

Another way to extend is to make pairs to 20. Students still use the familiar pairings: 2 with 8; 6 with 4, and so on, but must also keep track of whether or not they need another 10. It helps if students are already comfortable adding 10 to any number (see below).

Extending “Pairs-to-ten” to use halves

Second-graders, toward the end of the year, are likely to be able to learn to do this well. Even though this game deals only with small numbers (10 and under) and is using fractions, it is excellent preparation for adding and subtracting two-digit numbers mentally, and generally easier for children than the corresponding task in two digits (after hearing 60 and responding 40 to make 100, hearing 65 and responding 35).

This section is being revised with new content. Please see Language and mathematics for the original contents of this section.

English, like most languages, names numbers in ways that make it easy (most of the time) to add or subtract ten “by rhyme.”[1] While there’s nothing obvious about “two, twelve, twenty-two,” the pattern after that just rhymes: twenty-two, thirty-two, forty-two, fifty-two… In general, in English, things are a bit messy before 20 but then clean up nicely. It’s not a “trick” for children to use this fact: the naming, after all, was a deliberate choice!

↑ Some languages, like Japanese and Hungarian, are more regular; some, like French and Danish, are less regular.

Using 10 as an approximation

Fingers and facts from 11 through 20

Four hand addition or Leftovers, an activity for second grade

Call two children up and ask one to put up 6 fingers, the other to put up 8. This is what it might look like if they show the backs of their hands to the class.

Then you pounce playfully on the two 5s, gather them to yourself, and ask the class, in rapid succession.

Repeat with other pairs of children, using different pairs of numbers from 5 through 10 each time.

Children love it, and they’ll all want a turn. The ones who are demonstrating feel almost hugged when you pounce on the two fives and pull them slightly together. The whole class learns to see the “leftovers” — the excess over 5 — as a useful way of looking at numbers from 6 through 9.

A lot of important arithmetic learning and practice is involved. Just to put up eight fingers, a child must either count or know some fact that helps (5 + 3, 4 + 4, or perhaps even 10 – 8). To make sense out of the teacher’s pounce, the child practices the idea that two handfuls make 10. The child must be comfortable counting or adding up the leftovers (1 + 3), and must know the effect of adding 10 (the two handfuls) to another number smaller than 10 (the leftovers).

What if a child uses a combination that does not include a 5? For example, what if you ask for 6 and 8, and get

You can still play. You might, for example, grab a 3 and a 4 and ask

But the purpose of the game is to practice ideas about making 10, and adding leftovers. So, also say,

From now on, we will show as many fingers as possible on one hand, and then whatever else is needed on the other hand.

Two-hand addition with Invisible fingers, an activity for second grade

Call one child up. Playfully ask the child to show 8 fingers on one hand. Of course, this is impossible, so, to the puzzled or amused expression, say…

And now, playfully, to the class…

Children often “get” the silly game this quickly, but if necessary help again by saying “Show as many as you can.”

By not asking yet how many invisible fingers in total, you “extend” the time that children are keeping this in their heads.

Many children will enjoy getting a turn, and that gives the class plenty of practice keeping mental track of invisible fingers.