The author of this post, Dr. E. Paul Goldenberg, has over 40 years of experience in K–12 mathematics curriculum development, research, and professional development. In this post, he invites readers to take a look inside children’s early mathematics explorations and epiphanies and discusses the rich mathematics learning that occurs when you follow children’s leads and build upon their strengths.

Teachers are often encouraged, sometimes compelled, to pre-assess students and then focus on their weaknesses. After all, what’s teaching if not helping a child move from weakness to strength? But this story is about a different approach: recognizing and using strengths that are camouflaged by apparent weakness or hidden behind real weakness.

Understanding a child’s strengths and helping the child build on those strengths is effective and efficient, but it requires more than check-listing skills or comparing performance to norms. It requires getting to know how the child sees the world. That takes curiosity, focus, and time. And time is something that even the most committed and curious teachers, even with an assistant and a small class, have little of.

It also requires a kind of agenda-free observation, seeing what the child is doing and following the child’s lead rather than focusing on what the child isn’t doing and leading the child to do it. That, too, is hard, especially in a climate of daily learning objectives, formal documentation of progress, and scales, lists, and rubrics for everything. But Ella’s story illustrates the value of watching longer before targeting instruction and remediation. With luck, then, the teaching can build on strengths.

I first met this kindergarten in February. The children were in the hall measuring, in their own footsteps, the length of a whale and some other large sea creatures. Some children, some of the time, carefully paced heel-to-toe, but their zeal to reach the end impelled even the most attentive to speed up, inadvertently spacing out their steps. Their rhythmic counting mostly matched the speedy walking, but sometimes lagged behind or ran ahead.

Impressively, most children were reciting numbers accurately through 70 or so, even if not quite keeping pace with their feet. The teacher asked me to accompany Ella and be whatever help she needed. Ella wasn’t solid at counting. Overall, she seemed to be among the mathematically weaker children in this class.

With great focus and meticulous care, she placed heel to toe, counting softly up to 29 and then asked me “what comes after 29?”

She then continued to 39 and asked what came next.

She was very self-controlled and organized for a kindergartener (think of that careful stepping). She was also very watchful—her attentive eyes seemed to take in everything—and exceptionally quiet, saying little, but not shy to speak up when she had something important to say or ask like “what comes after 29?”

Though she hadn’t yet seemed sure of some numbers’ names, she soon became very good at adding them. Or perhaps she already was good, and we simply couldn’t tell.

In March, the class began collecting for charity. Over two months, they amassed thousands of pennies, a sizeable number of nickels and dimes, many quarters, and even a few dollar bills.

They also amassed a lot of experience with coins. They learned their values, and played with fairly challenging “puzzles,” as we called them, like being handed a quarter and being asked to pick out, from a pile of pennies, nickels, and dimes, “that much money” or being asked “can you make 25¢ with exactly three coins?, with exactly one coin?, with exactly five coins?” and so on.

Ella particularly enjoyed these puzzles, and was delighted when I asked her if she could make 25¢ with exactly two coins. Her expression, and her occasional gestures with a dime made it clear that she was clearly thinking, not just hesitating to answer. She continued thinking for seven or eight seconds—quite long if you think about lag times for a kindergartener. And then she gave a confident “no!” with a quizzical smile as if to say “you mean you really can pose problems that can’t be solved?!”

Near the end of the year, the children set about counting the money they’d collected. To help organize the counting, the assistant teacher prepared two sheets of paper taped together, with five loops on each sheet. The children could count ten pennies into each loop, count the loops by tens, and dump each hundred produced that way into a separate cup (or, alas, the floor, which received many gifts of pennies) so that they could later count the hundreds.

Some children initially just counted coins, regardless of value. But, with an example or two, all understood that a loop on their sheet could contain one dime or two nickels or anything that made exactly 10¢. There were also a couple of children who didn’t at first understand the goal and, after counting 100 pennies onto the sheet, dumped the 100 into an existing set of 100 rather than create a new one or, worse, dumped them back into the money-jar as if counting to 100 was the only goal.

Ella had no such confusions. She filled each loop with exactly 10¢, easily choosing whatever coins she needed. When she encountered her first quarter, she looked at me as if to ask what to do. I said nothing but my slight shrug was as if to say “you’ll figure something out.” That was just enough permission for her to continue what she was already reaching out to do. With a big smile she said, “I’ll just get another quarter and that’ll be this whole page.” She moved beyond the sub-structure of the page—the loops that must contain only 10¢—and saw the structure of the entire page, the five tens that make the page worth 50¢.

This reminds me of a boy who had great interest in books well before school, appeared to read silently with understanding, but, in the early grades, was halting and faulty at out-loud reading. Because reading ability was gauged by out-loud reading, he and his teachers all assumed that he was “no good at reading.” The problem was the medium by which they gauged reading ability: out-loud reading was not giving valid information. With this boy, as with Ella, we can’t retroactively know what skills were already there before we first saw them, but the speed with which full fluency was achieved when these children bloomed suggests strongly that more was already present than we had been able to see.

Ella might have already seen in her head, perhaps as a visual image, a structure of addition without knowing all the number names that would allow her to say what she “saw.” When she saw a pair of hands with a display of fingers, she fluently knew how many fingers were “hidden” to make that display.

She also seemed to have a sense of how much “overflow” there would be if fingers were added to that display, pushing the total past ten. But she could not give any evidence of knowledge of larger numbers until she built a structure for their names, knowing what came after 29, 39, 49, and connecting those with the litany of counting by tens that she already knew as a separate skill.

When Ella had that, she could then, pretty suddenly, show astonishing fluency with numbers into the multiple hundreds. The suddenness, like the suddenness of the boy’s acquisition of exceptional reading fluency in fifth grade, is what makes it seem as though she had the essential underlying abilities and understandings all along.

It doesn’t really matter whether the understanding was already there and unseen or whether it just grew quickly: the point is don’t assume that what you see is all there is. Skills do not develop at the same time or even necessarily in the same order in all children who eventually reach total competence. Children who are “late starters” sometimes catch up almost instantly once they do start. We sometimes call these kids “slow learners” but the learning isn’t slow. It may require removing a roadblock. It likely requires working through strengths—Ella’s fascination and facility with the cognitively challenging coin puzzles—rather than limiting a child’s input by focusing on weaknesses.

My own personal story is another illustration. My 7th and 8th grade math experience was, to my memory, filled with calculating compound interest, for which my interest was zero and my competence worse. I labored with multiplication facts and found the manual effort of writing difficult, messy, and unreliable. As an apparent math-dud, I was placed in the lowest 9th grade algebra class.

But I read word problems fluently unlike my classmates. The school, for its sake, wanted me out of that class. They couldn’t fit me in the middle level—it was already full—so they ditched me in the top class. Where 7 × 8 and 9 × 6 were muddled in my head and $673.98 compounded twice at 27% had been torture, 2x – 5 = 30 – 3x was obvious—the numbers were easy and the logic was beautiful. Being given fancier mathematics was the “remediation” I needed. From then on I excelled in mathematics through calculus in high school, and attended all sorts of special institutes in mathematics for “gifted” high schoolers (including an abstract algebra course, and what was, way back then, computer science). But my “gift” in mathematics wasn’t apparent while we were just calculating compound interest! High school algebra became a foundation from which I learned even the arithmetic. I was lucky. I could easily have been left reviewing “basics” and never have seen serious mathematics.

Even while Ella was still looking inept at the subject, her teachers noticed two valuable attributes that she brought to her mathematics. Ella observed so closely, one almost felt studied by her. All that observation was bringing in data; we just couldn’t yet tell what she knew. And, although Ella could be quite independent and was not as garrulous as many kindergarteners are, she asked when she needed information. This kind of self-advocacy, too, was promising.

If one judged Ella’s mathematical aptitude by her performance on skills such as counting, then even by the second half of that year when I first met her, it looked poor. For her, it was especially important that her teachers understood that skills don’t develop in a fixed order. Otherwise, they might not have posed the challenging puzzles that Ella found so intriguing and was exceptional at—the fancier mathematics that was the effective “remediation” for Ella and that showed what Ella could do. 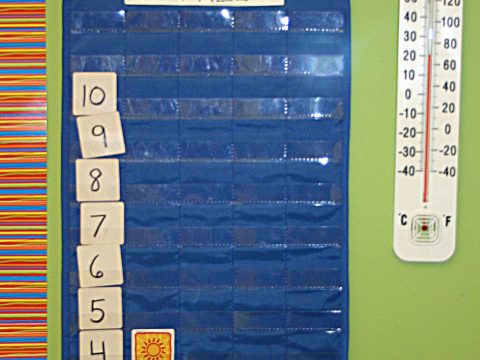