Students who have the informal notion that area is the “amount of 2-D ‘stuff'” contained inside a region can invent for themselves most of the formulas that they are often asked merely to memorize. Each formula they reinvent helps strengthen their understanding (and memory) for the other formulas they know. (See also surface area.)

By choosing a square as the unit of area, we get an intuitive idea about the area of rectangles. If we decide that the area of this square

is 1, then a rectangle

A rectangle that is twice the height of

would have twice its area, so the area of

is 2 × 7 units of area. We can count the two rows of seven squares. Similarly,

Because a rectangle can be drawn at a slant, “height” is defined to mean “the direction perpendicular to the base,” and “base” is defined to be, well, whatever side you choose it to be.

That works for counting numbers. It even works for fractions.

To include all numbers, we define the area of a rectangle to be base × height (where “base” and “height” mean the lengths of those sides, measured in the same units).

The cut shown above makes it easy to see that the base length is unchanged. In fact, the perpendicular cut can be made anywhere along the base.

Shoring up the holes

This dissection gives an intuitive understanding of the area formula for a parallelogram, a reason that it should be what it is. But we have not questioned whether the dissection really “works.” That is, when we cut the parallelogram

and rearrange its parts, we expect to get

and the result certainly looks like that. But appearances can be deceptive. What assures us that when we move that triangle, the result is a rectangle? What if it is more like

(though less exaggerated)? If the result is not always a perfect rectangle, we can not use our knowledge of the rectangle’s area formula to develop a formula for the parallelogram. In high school, students will be able to prove that the two parts of the parallelogram, when reassembled properly, do make a rectangle. In grades K-8, for the most part, students must rely on the visual experiment and get an intuitive feel. Learn more about why these dissections work.

What if we pick the short side to be the base?

We are free to choose any side as the base; “height” is defined to be measured perpendicular to the side we choose as the base. If we take the short side (blue) as the base, the dissection shown above isn’t as convincing. Cutting along that altitude and rearranging the parts leaves a mess:

In this particular example, we can salvage the mess by making one more cut,

but what if the parallelogram were even longer and skinnier?

It turns out that any parallelogram, no matter how long and skinny, can be dissected in this way so that the parts — perhaps many of them — can be rearranged into a rectangle. But it takes more work to show that this can always be done. We need another idea.

A slightly different dissection idea makes life much easier in this case. (On your own, you can show that it works in the original case, too.)

Intuition and proof, reprise: Again, the dissection provides the essential insight, but it takes a bit more work to assure that the two yellow triangles, which certainly look as though they fit together to make a rectangle, really do fit precisely, and not just almost.

Why is it important to be so careful?

When we build other area formulas (below), we will want to use our how to find the area of a parallelogram, and so we want to be able to rely on the rule we’ve found. We can be sure that rearranging parts doesn’t change the area: that is, after all, how we define area. But we must also be sure that the parts fit together the way we claim they do, or we can’t rely on the measurements we’ve made. And we must be sure that the base × height rule does not depend on a lucky choice of base.

In most curricula, students don’t have a systematic enough base of geometric knowledge prior to grade 8 to make sound proofs that these dissections work. But the intuitive understanding is enough to explain and justify the formulas, and a good grounding for later geometric study.

We can dissect the triangle into two parts — one of them a triangle, and one of them a trapezoid — by slicing it parallel to the base. If we cut the height exactly in half with that slice, the two parts fit together to make a parallelogram with the same base but half the height.

So base × half-height gives the area of the triangle. A similar dissection shows half-base × height. Either of them reduces to

Doubling the triangle and then halving the resulting area

Another way of thinking: two copies of the triangle make a parallelogram with the same base and same height as the triangle.

The parallelogram’s area is base × height, but that is twice the area of the triangle, so the triangle’s area is

of base × height, as we saw with the dissection method.

(As always, pick a “base” and measure the height perpendicular to that base, from the base to the opposite vertex.)

Doubling the trapezoid and then halving the resulting area

As was true with the triangle, two copies of a trapezoid can be fit together to make a parallelogram.

We could also dissect the trapezoid the way we dissected the triangle, with a single slice cutting its height in half. The two parts fit together to make a parallelogram whose base is the sum of the two bases of the trapezoid, but whose height is half the height of the trapezoid.

In the case of the trapezoid, the bases cannot be chosen at will. The two parallel sides are the bases, and height, as always, is the perpendicular distance from one base to the opposite.

Either way, the area of the trapezoid is

Area of other special quadrilaterals

The area of a rhombus can be found by cutting and rearranging the pieces to form a parallelogram. This can be done several ways:

a * squiggly, where squiggly is the height. The area of the second triangle is 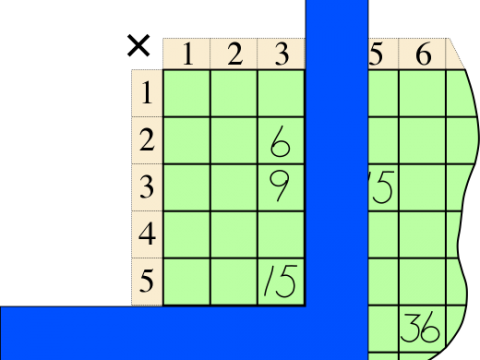