Some examples of quadrilaterals:

Discussions of 2-D shapes sometimes refer only to the boundary (the line segments that form the edges of the figure) or to the interior as well. When we talk about “dissecting” a parallelogram and rearranging the parts to form a rectangle in order to determine the area of the parallelogram, we are clearly referring to the edges and the interior. The usual definitions of polygons, however, refer only to the line segments that form the edges of the polygon. Most of the time, context will make clear what you mean, but you should remain aware that in some cases you may need to clarify.

Elementary school curricula typically have children learn the names of special subsets of quadrilaterals with particular features. Here we list the special names. See the articles on each type for their definitions and special properties.

Some K-8 curricula also include

What’s in a word?

Compare quadri- to Spanish cuatro. Lateral means “side” (think of football, for example).

Quadrilaterals can be classified by whether or not their sides, angles, diagonals, or vertices have special properties. The classification schemes taught in elementary school involve the number of pairs of parallel sides, and the congruence of sides, and whether or not all the angles are right angles (all angles are congruent).

The names of many of these special quadrilaterals are also typically part of the elementary curriculum, though little else about the properties of these figures may be studied until high school. Elementary school typically has children learn the names of

Though the names that are given to individual figures does not change, the way that they are grouped may depend on the characteristics used to sort them. In the classification scheme shown above, parallelograms (B, C, D, E, and F) have a place of their own (the right hand column), and even rhombuses (B, C, D) have a place (the bottom row), but rectangles (F and B) aren’t distinguished from the others. In the classification scheme below, rectangles (F and B) have the right hand column to themselves, but parallelograms are not grouped in a way that excludes A, which is not a parallelogram. 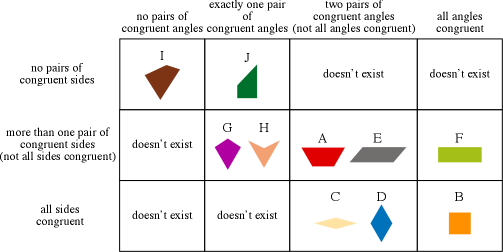 Children in primary grades often find it hard to assign anything (geometrical or otherwise) simultaneously to two categories.[1] Casual language also treats shape-names as “exclusive” rather than “inclusive.” Thus, casual language treats square and rectangle as distinct, rather than treating square as a special kind of rectangle, as mathematics does. Similarly, students tend to treat rectangles and parallelograms as disjoint classes, rather than seeing a rectangle as a special type of parallelograms.

Another possible way to classify quadrilaterals is by examining their diagonals. This may be accessible for middle grade students who have learned about perpendicular lines and bisectors.

In addition to being four-sided polygons, all quadrilaterals share some additional properties.

Angles in a quadrilateral

Children can also experiment with this idea by

Multiple copies of that foursome will tile the plane. 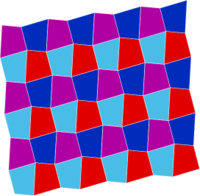 Even if one starts with a concave quadrilateral like this

, one can group four identical copies of them snugly around a point

, and can tile the entire plane with multiple copies.

Investigations: When investigating special quadrilaterals and their properties, students find many ways to distinguish quadrilaterals. Some productive explorations ask students to look for special properties of angles (congruent or supplementary), sides (parallel, perpendicular, or congruent), and diagonals (perpendicular, bisecting, or congruent).