More formally: A square number is a number of the form n × n or n2 where n is any integer.

Objects arranged in a square array

The name “square number” comes from the fact that these particular numbers of objects can be arranged to fill a perfect square.

Children can experiment with pennies (or square tiles) to see what numbers of them can be arranged in a perfectly square array.

And sixteen pennies can, too:

But seven pennies or twelve pennies cannot be arranged that way. Numbers (of objects) that can be arranged into a square array are called “square numbers.

The number 12 is not a square number.

Children may enjoy exploring what numbers of pennies can be arranged into an open square like this. They are not called “square numbers” but do follow an interesting pattern.

Square numbers in the multiplication table 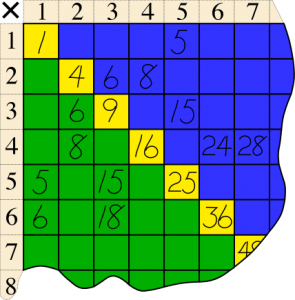 Square numbers appear along the diagonal of a standard multiplication table.

If you count the green triangles in each of these designs, the sequence of numbers you see is: 1, 3, 6, 10, 15, 21, …, a sequence called (appropriately enough) the triangular numbers.

If you count the white triangles that are in the “spaces” between the green ones, the sequence of numbers starts with 0 (because the first design has no gaps) and then continues: 1, 3, 6, 10, 15, …, again triangular numbers!

Remarkably, if you count all the tiny triangles in each design—both green and white—the numbers are square numbers!

A connection between square and triangular numbers, seen another way

Each is “triangular” (if we ignore the stepwise edge). Put the two consecutive triangles together, and they make a square:

. This square is the same size as 16 white rods arranged in a square. The number 16 is a square number, “4 squared,” the square of the length of the longest rod (as measured with white rods).

. When placed together, these make a square

Inviting children in grade 2 (or even 1) to build stair-step patterns and write number sentences that describe these patterns is a nice way to give them practice with descriptive number sentences and also becoming “friends” with square numbers.

Here are two examples. Color is used here to help you see what is being described. Children enjoy color, but don’t need it, and can often see creative ways of describing stair-step patterns that they have built with single-color tiles. Or they might color on 1″ graph paper to record their stair-step pattern, and show how they translated it into a number sentence. 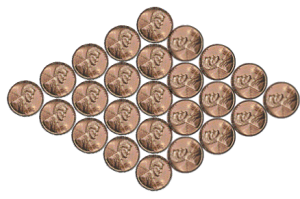 From one square number to the next: two images with Cuisenaire rods

(2) Start with W. For each new square, add two rods that match the sides of the previous square, and a new W to fill the corner.