Although there are many kinds of symmetry, elementary school generally presents only reflective symmetry (or “mirror symmetry”). As a result, school materials tend to use the word symmetry as if it had only that one meaning. This article will focus on that one meaning, but illustrate others as well. 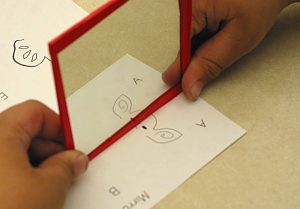 Reflective symmetry and “line of symmetry”

Mirror-symmetric objects have at least one line of symmetry, a line along which the figure can be folded into two precisely matching parts, parts that are mirror images of each other.

A common misconception found even in many glossaries and texts: Not all lines that divide a figure into two congruent parts are lines of symmetry. For example, the diagonal of a (non-square) rectangle is not a line of symmetry.

Well before children begin any formal study of symmetry, playing with mirrors — perhaps on Pattern Block designs that they build — develops experience and intuition that can serve both their geometric thinking and their artistic ideas. The colorful design above has only vertical and horizontal lines of symmetry, but placing a mirror on it at another angle can create a beautiful new design. 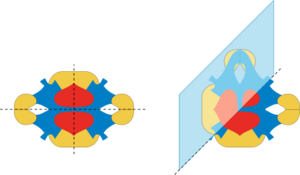 The first figure below shows that the letter A has a vertical line of symmetry, but it’s rather “tame” play. More intrepid experiments give other interesting results.

The same is true of the letter M.

Letters like B and D have a horizontal line of symmetry: their top and bottom parts match.

Some letters, for example, X, H, and O, have both vertical and horizontal lines of symmetry.

And some, like P, R, and N, have no lines of symmetry.

Another symmetry that children sometimes use in their Pattern Block designs is “Rotational Symmetry.” A figure has rotational symmetry if some rotation (other than a full 360° turn) produces the same figure. For example, these figures, when rotated just the right amount — 360°/3 for the “name” picture and 360°/5 for the star — look precisely as they did before rotation. 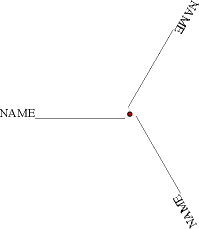 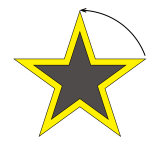 The letters, N, Z, and S also share that property.

Note that some figures, like the star and the colorful blob at the top of the page, but not the letters N, Z, or S, have both reflective and rotational symmetry.

The most symmetric shape

What’s in a word?

The “metry” in symmetry and geometry and metric refers to measurement.