The author of this post, Dr. E. Paul Goldenberg has over 40 years of experience in K–12 mathematics curriculum development, research, and professional development. In this post, he challenges us to consider whether children are giving us the wrong answers OR we are asking children the wrong questions.

Wrong answers can, of course, be signs of mathematical misconception or miscalculation. (I just watched an honors-level seventh-grader write 42 in several places where he needed 6 × 8.) Or they could result from faulty logic. Or not knowing a key mathematical term or fact or technique. Any of these might warrant follow-up mathematical instruction.

But, very often—in fact, it seems to me, most of the time—hesitations or wrong answers in math class that are attributed to weakness in mathematics are the fallout from some confusion of communication. The source is not in the mathematics. In fact, “wrong” answers are often correct answers to an entirely reasonable alternative interpretation of the question.

Communication slips are common. Somebody says the wrong word, or we hear it wrong, but if we already understand the topic, context, and likely intent, we manage to correct what we hear so quickly and unconsciously that we may not even notice the slip.

In fact, we “correct” what people say even when they haven’t slipped! For example, in the middle of a conversation, your friend interjects “Omigosh, do you know what time it is?” You might answer “It’s around noon, I think.” Or you’d automatically glance at your watch or phone. Or, alerted by “Omigosh,” you might reply “Why, what’s happening?”

Here’s what you would not do, unless you were a joker, rigidly literal-minded, or a poorly programmed machine. You would not just answer “yes” and be done with it.

Successful understanding requires more than knowing what the words mean. It also takes a reasonably on-target theory about the mind of the speaker. Despite the literal meaning of your friend’s “Do you know what time it is?” your (unconscious, automatic) theory is that your friend wants to know the time, not find out whether or not you know it.

In fact, it’s almost impossible to understand what someone means just from their words. We need knowledge about the real world, the context in which the words are set, and the likely thoughts of the speaker. Communication is complicated.

Communication with children is especially complicated. They know less about the world and what people are likely to say, so their guesses about what we could mean are both more restricted than what’s actually possible and less restricted than what’s socially acceptable. Conversations with kids can be funny precisely because of these surprise interpretations, entirely logical to the kid but totally unexpected by us. And sometimes, when a child is scolded with “You know exactly what I mean!” the child really doesn’t know.

How Does This Affect Math? An Example From Fourth Grade
The class was taking a pre-test on perimeter. One question showed a rectangle that was roughly (not precisely) 1½” by 2½”. The text said, “What is the perimeter of this rectangle? Measure with an inch ruler. Round to the nearest inch.” Vitesse wrote down the answer “10”. Wrong, but the purpose of a pre-test is to indicate what Vitesse needs to learn. So, what went wrong? Vitesse’s measurement? Her addition? Her rounding? Her understanding of the word perimeter (which was, in fact, the only thing that the pre-test was intended to check)? Of course, the wrong answer alone can’t tell us that, so the first step in intervention is not to start explaining but to ask how she got her answer. (Kids automatically interpret such queries as “You got this wrong,” so it’s important to ask nearly as often about right answers as about wrong ones.)

It turns out that Vitesse knew exactly what perimeter meant, and how to do all the measurement, rounding, and adding steps correctly. Nor was her answer, 10, a slip of the pen. She explained it all perfectly: It said measure, so she measured. It said round to the nearest inch, so she rounded the measurements, getting 2″ and 3″. And it asked for perimeter, so she added those rounded measurements.

For the intended purpose of the pre-test, Vitesse got everything right. It wasn’t important to know whether she could add 1½ + 2½ + 1½ + 2½, but I was curious. She did that perfectly, too, getting 8 (the answer book’s answer). All she didn’t know was what the writer really intended by “round to the nearest inch.” In fact, if she had added the mixed numbers first, she probably would have wondered why the writer said anything about rounding! And, though I didn’t think of asking, quite possibly she did add the mixed numbers first, notice that the answer was already in whole inches, and conclude that the writer must have meant to round first. In any event, no mathematical intervention was needed, except perhaps to say that, in general, when people say “round,” they usually mean “round only the final result.” Too bad the writer of the pre-test question wasn’t more mathematically precise. I wonder how many kids “fail” because the writer failed! 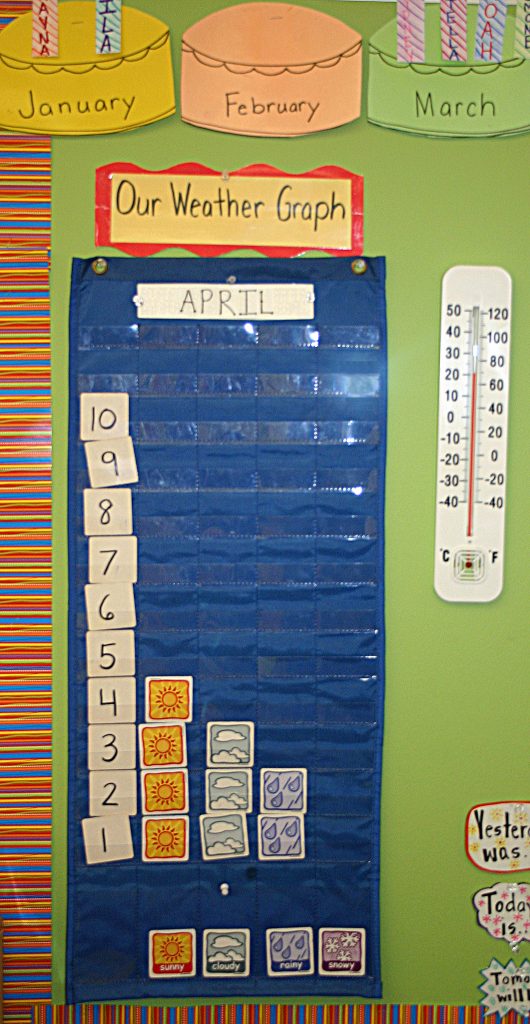 An example from kindergarten. The teachers, Sharon Miller and Kate Bernstein, regularly begin the day with “calendar time” in which the children sing a song about the days of the week; assign yesterday, today, and tomorrow a day-name; place a new number sticker on the calendar; look for a pattern in the color or shape of the number sticker; increment the days of the school year, bundling each new ten and, over time, the ten tens; and keep a graph of the weather. Different children in the class have assigned leadership jobs for each of these tasks.

The weather graph, restarted every month, has columns for sunny, cloudy, rainy, and snowy days. After that day’s “meteorologist” places a card on the graph to record the day’s weather, the teacher asks questions like “how many days were sunny this month?” As the year progresses, she switches things up, asking, for example, “How many days were not sunny?”

To that question, Aaron eagerly said “six” and his reply was as instant as our reply of “five” would have been. He “saw” the six, just as we “see” (subitize) the five. Of course, in kindergarten, counting slips are never a surprise, and eagerness is a powerfulsource of slips. But nearly all of the children readily subitize small quantities like 3 and 2, many of them, at this point in the year, recognize this as 5, and some of them even subitize the five as we do. So, for any of them, this “slip” is at least notable. But Aaron was especially unlikely to slip in that way. For a six-year-old, he was exceptionally facile with numbers as I described in my “Oral and Written Mathematics: A Story from Kindergarten” post. While even adults might get the correct answer but distractedly say something else, it was worth an extra thought to understand where Aaron’s reply might have come from.

It turns out he was answering a different question! His understanding of “how many were not” stemmed from the way that question is usually asked in his classroom.

“How many fingers are showing?”

“How many fingers are not showing?”

In each case, the “not” question referred to a missing amount. Aaron interpreted “How many days were not sunny?” the same way. The sunny day column had four cards. In that column, six cards are missing. Six!